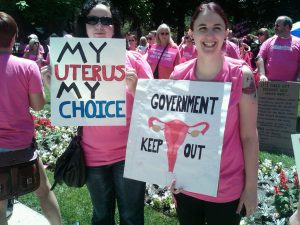 The right to abortion, the right to own, use and dispose of one’s own body.

Right for abortion, legal status of an embryo.

Artificial abortion has always been classified as the most difficult to resolve ethical and legal issues. In the present conditions, this issue becomes even more acute. Is it ethical and legal to kill an already born life? Are the methods of artificial abortion that are used now? Is it possible to use seized embryos and fruits in the production of medicines and especially cosmetics? Here are some of the many problems of abortion.

The first rules on abortion were deontological medical rules. The Hippocratic oath categorically forbade the doctor to artificially terminate the pregnancy of a woman1. However, Aristotle believed that artificial abortion is permissible for demographic purposes, but only until the moment when “sensitivity and motor activity” are formed in the bud.

In ancient Rome, abortion was widely practiced. At first, in Roman law, the fetus was interpreted as part of the mother’s body, so the woman did not, was punished for killing the fetus or expelling him from the womb. Later, the embryo, “having one,” was endowed with some civil rights. Artificial abortion qualified as a crime when it was used to obtain property rights. At the same time, parents were recognized as victims.

Handbook for the Protection of Mothers and Infants: Systematic Collection. Current legislation and official. Publishing house “Protection of motherhood and infancy.

A true awareness of the value of the embryo is associated with the emergence of Christianity. Already in the era of early Christianity, abortion was identified with the killing of a person. However, according to M.D. Shargorodsky, the object of this crime recognized morality, and not the life of the child.

The death penalty for abortion (illegally conceived) was introduced in 1649 (Code of the Tsar Alexei Mikhailovich), and was abolished a century later5. The draft code of 1813 uses the term “infanticide” to mean “killing children in the womb” .

In the pre-revolutionary legislation, the cases clearly differed:

By the XX century the medical doctrine has already introduced the concepts of “abortion on request” and “abortion for medical reasons”. The first state to legalize “abortion upon request” was. In a joint decision of the People’s Commissariat of Health and the People’s Commissariat of 11/18/20, 7 it was said: “It is allowed to carry out an artificial termination of pregnancy in a setting of Soviet hospitals, where it is provided with maximum harmlessness.”

About abortion for non-medical reasons: order

The scope of the legality of abortion was radically expanded in 1987 when Ministry of Health issued Order No. 1342 on abortion for non-medical reasons. This document allowed, at the request of women, to terminate a pregnancy with a long gestation period (up to 28 weeks) if circumstances such as large families (more than 5 children) were documented, etc. It must be added that in our country there always existed a long a list of medical indications that gave the right to terminate a pregnancy up to 28 weeks.

Thus, over the past decades, abortion legislation has become more and more liberal.

At present, four types of abortion legislation can be distinguished within European countries. This circumstance is directly related to the prevalence of a person’s understanding in each country.